OpenInsight 10 has been officially released, and we are pleased to share with you that both SRP Utilities and SRP ActiveX Controls are available for the new 64-bit-only OpenInsight platform.

You can now download SRP Utilities 2.0 in either 32-bit or 64-bit flavors from our product website. The download button for the 64-bit version is beneath the 64-bit icon on the product page. Unlike the 32-bit download, the 64-bit download is a ZIP file. Our 32-bit installers cannot talk to 64-bit OI, so it cannot automate the RDK installation. Thus, you’ll have to extract the ZIP file to a folder and do a classic RDKINSTALL command from OIX’s command line.

It’s taken quite a long time, but we finally have a new release of the SRP ActiveX Controls. There have been many improvements, but we are going to highlight just a couple.

As of version 4.1.1, all themes are managed independently in memory. Setting the Theme property of a control should no longer affect the theme of any other control.

It took a lot of effort to port over ten years of ActiveX code to 64-bit, yet we are pleased to announce OIX compatibility so soon after we learned that OIX would not support 32-bit at all. Simply go to our SRP ActiveX Controls product page and you’ll see the download button beneath the 64-bit icon. You’ll notice the OCX is called SRPControls64.ocx. That means you can register both 32-bit (SRPControls.ocx) and 64-bit (SRPControls64.ocx) on the same machine (assuming the machine is 64-bit). In either case, you still use the regsvr32 command. Regsvr32 is smart enough to register 32-bit or 64-bit OCXs correctly.

Registering 32-bit SRPControls.ocx on Windows Server 2016 or earlier works out of the box, but registering SRPControls64.ocx might generate the following error. 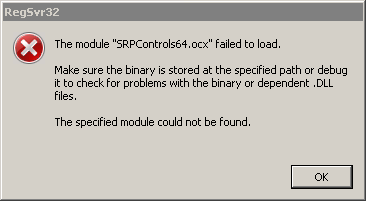 The solution to this problem is to download and install the VC++ Runtime Redistributable for Visual Studio 2013.

Once the 64-bit controls are registered, you can add our controls to your OIX form using the OLE control from the toolbox. When you do so, you’ll be prompted for a ProgID and License. Enter the ProgID as you did before and leave the License blank. The control should appear on the form.

There are some caveats to using OLE controls in OIX. First, you can never change an OLE control’s ProgID once you’ve set it. So, if you decide on a different control, you have to delete the current one and add a new one. Second, you cannot set properties of OLE controls in the Form Designer like you could in OI 9.x. So, if you are porting an application from OI 9.x to OI 10, then you will need to add code setting those properties that you used to set in the old Form Designer.

We have a new licensing system. Licenses will now have the .SRPLIC extension and are no longer DLLs. This will avoid the locking issues DLLs typically impose. Instead, these license files are simply encrypted data, making them lightweight and more easily extensible. The new license files have the added benefit of not needing to be named SRPLicense. They can be named anything so long as they end in .SRPLIC. The 64-bit version of our controls only use the new encrypted license system. The 32-bit version of our controls are backwards compatible with SRPLicense.dll, but we will be deploying the new license format from here on out.

4 Responses to 64-Bit Releases are Here