If you studied the IDE screen shots from last year it would seem at first blush nothing much has changed. However, once you’ve spent a little time with the product it is obvious there is more to explore. The top level menus have been fleshed out, exposing more tools which have been developed and added to the product. One notable example is the fully integrated Git version control menu and toolset: 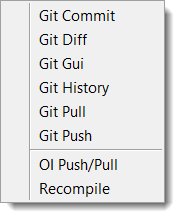 Because this is an integrated development environment, there is no need to open a tool and then open a dialog to access an entity. There is now one unified Open Entity operation. At present, this is accessed through the File > Open > Entity menu, or simply using the Alt+O accelerator. This displays a dialog listing all of the possible entity types available. Picking an entity type then displays a full list of entities related to that type: 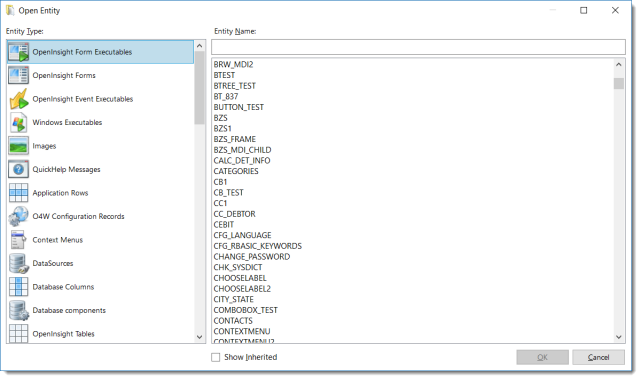 Developers might also be interested to know that the entity types which appear at the top of the list are there because they were the ones I most recently accessed. This is just another way the new IDE attempts to help with work productivity. During his presentation, Andrew McAuley of Sprezzatura made similar observations. He commented how easy it was to relearn his work flow using the new IDE, commending Revelation for their adoption of standard Windows keyboard shortcuts, namely Ctrl+S to save the work (regardless of which designer was being used) and Ctrl+F4 to close the current document. I concur with Andrew, although for a short while I experienced an odd feeling when muscle memory had me searching for a tool to launch and it was simply not there. After awhile, one starts to forget that there are different designers under the hood. Since all entities (aka document windows) appear in the same IDE workspace, the focus is on the work at hand rather than the underlying tool. Switching between different entities automatically adjusts the surrounding IDE as needed (e.g., the Property Panel reconfigures for the current entity), providing a smoother experiencing without the need to perform so many Alt+Tab operations to navigate to an open tool.

Last year we mentioned the Output Panel as a destination for messages. From what little we saw, it was a simple display of messages, not unlike the System Monitor. This year’s model has undergone a major overhaul. First, there is now a dropdown allowing the developer to see output from four different sources:

The IDE remembers the output results from each source, allowing the developer to cycle through them without losing information from the other sources. The formatting of the results is much richer as well, especially with the code editor/designer:

Another helpful feature is the integration of the compiled help. No longer will the environment launch the external HTML Help viewer. Instead, hyperlinked and searchable help documents now appear directly in their own window within the IDE workspace. It also appears that Revelation is using a different tool to publish their help material. I suspect this was done to improve the quality and management of their ever changing help documentation.

There are many other little details that help to make the IDE a much better tool for productive development. There are also many areas that simply do not work or need special attention. While Revelation has already given notice that these items are likely familiar to them (and will be addressed), they have invited us to offer constructive input and suggestions. We look forward to putting on our designer’s caps and helping to improve the IDE in what little way we can. When the product is ready for beta release, Revelation will once again put out a call for beta testers and will be granted access to their dedicated issue tracker.