The test will focus on the number of records read and written each second by the test routine as it processes through all the records in a table and making a minor change to each record. This behavior would be similar to a maintenance or end of day task.

The benchmark routine is a latent select of the PERSON_INFO_TEST table with a readnext/modify record/write record loop to benchmark performance. The number of records read and written every 5 seconds was averaged and recorded for comparison. The modify record processes added a date time stamp to the end of the record causing records to gradually get larger with each loop. No locking was performed and no indexing was added to the table. The test routine was run 3 sequential times in each system.

The first 9 samples were dropped from the results to allow for test ramp-up and the following 30 samples were charted.

The UD 5.0 has very consistent performance with almost no peaks or valleys in the result but it’s 72% slower than the UD 4.7.

Upon examination the the substantial difference in performance is attributed to the UD 5.0 shipping with encryption activated as the default configuration. The option was set during the server setup program at the connection details screen. 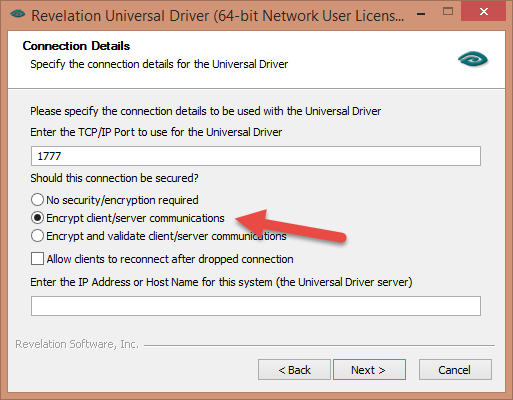 Let’s see how the benchmarks change if we deviate from the defaults and disable encryption. Encryption can be disabled by following these 3 steps:

After making these changes the PERSON_INFO_TEST was reloaded back to a fresh copy. Let’s see what the results look like now.

Re-running the UD 5.0 benchmarks with encryption turned off results in an average of 9379 records/sec putting it slightly ahead of the UD 4.7. Re-comparing the previous UD 4.7 results with the new UD 5.0 benchmarks is shown in the chart below.

The UD 5.0 performance has the same peaks and valleys as the UD 4.7. Both Universal Drivers perform equally well in the benchmark routine.

Out of the box the UD 5.0 option to use encryption severely impacts performance by more than half. When encryption is disabled performance is comparable to the UD 4.7.

Revelation Software has taken a lot of steps to ship products with secure default configurations over the past few years and I’m glad to see security turned on by default but the impact to performance should be evaluated before deploying the UD 5.0 on a large scale. The UD 5.0 isn’t advertised as being more efficient than previous Universal Drivers but it does have a number of very attractive features that enterprise customers will find useful. I’ll be diving into those features in subsequent articles about the Universal Driver 5.0.